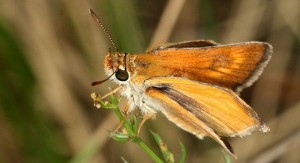 It’s name is derived from Lulworth Cove in Dorset where its only UK population was discovered in 1832. Its population here, restricted to a few suitably grassy slopes, is currently estimated to be at record numbers! Females lay rows of around 5 eggs on just a single plant species; Tor Grass Brachypodium pinnatum. They fly in the summer months and have a short adult lifespan of just 5-10 days. The females have a circle of golden marks on the forewing, often called ‘sun-rays’ due to their likeness to the rays around the eye of a peacock’s feather.