An enormous wood spread out at our feet that reached down to the ocean; the tree-tops, hung about with lianas, and crowned with great bushes of flowers, spread out like a great carpet, the dark green of which seemed to gleam in contrast to the light…I can tell that I shall be very happy here and that such impressions will often cheer me in the future”

During my degree I was given the opportunity to embark on an expedition to collect the data for my undergraduate thesis in Pacaya-Samiria National Reserve, Peru. One of the largest protected areas in Peru, it covers more than 20,000 square kilometres of tropical Amazonian rainforest; that’s an area the size of Wales! We were based on a research vessel named Lobo de Rio, which translates to River Wolf; a local name given to the Giant Otter Pteronura brasiliensis which is found throughout the Amazon. I had chosen to study the communities of Dragonflies (Odonata) at a variety of rainforest habitats. The most memorable of these, and the most rich in dragonflies, was at a large lake about a 45 minute walk into the forest. I swung for dragonflies whilst stood on the front of a catamaran-style boat which Gabriel, my field assistant, had knocked up by strapping two dugout canoes together with some log crossmembers and rainforest twine. He would paddle from the back pushing me close to the waterside vegetation where I would lunge at passing dragonflies. Unsafe in waters teaming with Piranha and Caiman, but highly effective nonetheless.
When I wasn’t prancing around with a net there was time to head off into the forest with my fellow researchers and lend a hand with their surveys.

A great variety of projects were underway in Pacaya-Samiria during June and July 2010. Macaw counts, Leafcutter ant investigations, Giant Otter studies, Caiman surveys and fish counts were just a few of the research topics.
Working alongside a team of Peruvian guides was a massive bonus; learning about a whole host of creatures that, without them, would have gone unnoticed. Their knowledge of the traditional uses of the living world astounded me from day one when my guide cut down a ‘Sipo de Augo’ liana and drank crystal clear fresh water from it; genius!
A small group of reserve staff were housed at our mooring and just like everywhere else I seem to visit; football was on the cards. The most enjoyable match began in sunshine and ended in a monsoon downpour; we were covered in mud from head to toe.
Other highlights of the expedition included close encounters with the endangered River Otter, catching and collecting data on Caiman species and getting bitten by a baby piranha.
Five weeks in the Amazon was never going to be long enough, but with a huge smile across my face and a laptop full of data, I waved goodbye to the rainforest and returned to Iquitos to begin my journey south to Lima, Cusco, Puno and Arequipa. 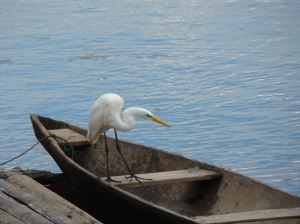 “Everywhere you look there is life; over the side of the wobbling dugout canoe, a freshwater ray gliding past; across the river bank, a creep of tortoises sun bathing atop a tangle of branches; up in the canopy, a troop of squirrel monkeys foraging for fruit and above in the sky a noisy flock of the most beautiful birds in the forest, the scarlet macaw.