Reptiles and amphibians are sometimes thought of as primitive, dull and dimwitted. In fact, of course, they can be lethally fast, spectacularly beautiful, surprisingly affectionate and very sophisticated”

In December 2015 I embarked on an expedition to a remote corner of Northern Madagascar as part of a small international team of scientists. We were located north of Bealanana in the Sofia District, right on the front line of deforestation. Our expedition aimed to study the effect of forest edges on wildlife communities, as well as support research projects of young Malagasy scientists. An additional aim was to communicate our research and raise awareness of conservation issues in Madagascar through the production of a short film.

Madagascar possesses unparalleled levels of biodiversity and endemism, yet the country has lost up to 80% of its forest cover. Deforestation doesn’t just reduce the total area of surviving forest but it also increases the proportion of forest edges. These edges are exposed to the fluctuating elements of the neighboring grassland, and are usually hotter, drier, and more disturbed. Edges are very different habitats. But what we don’t know is how they impact the species that live in the forest. Most importantly, we do not know how far in to the forest edge effects are felt.

It is estimated that 90% of Madagascar’s surviving forest is within 1 kilometer of a forest edge, making our research of critical importance. We will be surveying for reptiles and amphibians as they are excellent indicator species, being highly sensitive to changing environmental conditions.

In a practical sense, with much conservation attention now focused on forest regeneration and habitat corridors, we hope to be able to assess the value of smaller fragments which have large proportions of edge habitat. Thus, we could prioritize those fragments which have the potential to support diverse wildlife populations. The issue of edge effects is not unique to Madagascar. In fact the wildlife of any fragmented forests around the world will be at risk to the effects of the forest edge. 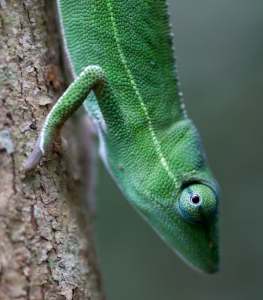 “It took several days to reach Bealanana. One of our 4wd vehicles kept overheating and our drivers hadn’t traveled this far into the mountains before. We couldn’t reach the village as the track became deeply rutted with thick mud a few kilometers out. We offloaded our kit onto zebu carts which eventually limped into Bealanana covered in mud. After two days of heavy rain we walked into the mountains with 30 porters, and set up camp on the edge of the forest. Our first night began with a ferocious storm.