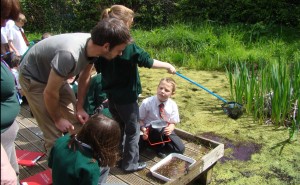 Upon being informed of their pond dipping lesson the Year 4’s stared back with slightly concerned expressions. It was clear that much of the class had conjured up other meanings for said ‘pond dipping’. A look of relief spread around the room when I subsequently explained the mornings activities.

I was going to teach some very basic ecological principles through pond dipping. What is a habitat? What is an ecosystem? Why are ponds important habitats? And what lives in the school pond and who eats who? The pond in question had the potential to be fantastic but sadly it had been severely underutilized as a tool for science education and was covered in a thick layer of duck weed. One of the teachers present explained she had never visited the pond in the 5 years she had been teaching. I’m sure this is typical of most schools throughout the UK and it’s a great shame, because the school pond is often the most biodiverse habitat inside the school grounds. It’s a bit like going to Brazil to study insects and spending your whole time in a laboratory in Rio.

My upbringing was such that i was regularly exposed to the natural world and as a result, have become fascinated by it. I think a handful of people are born with an inbuilt passion for nature but its only realised when exposed to it first hand.

So after filling our white trays with newts, caddisfly larvae, dragonfly nymphs, pea mussels and water hoglouse it was clear that many of the children were absorbed by the creatures whizzing around in their pond.

Let’s hope a child or two from this class goes home asking mum for a pond.