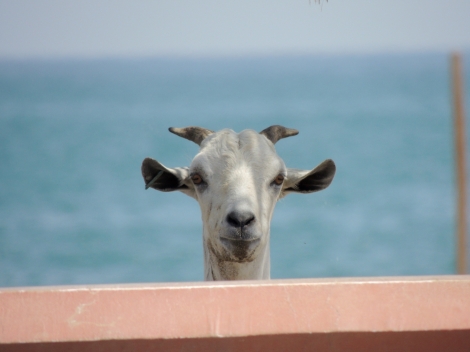 Pastoral farming in Dhofar is made possible by the favourable climatic conditions caused by the Indian monsoon. From June to September low cloud and mist form against the southern mountain slopes which rapidly regenerates the vegetation. There is approximately 0.5 million ha of grazing land in Dhofar (Al-Mashakhi and Koll, 2007) and approximately 633k livestock animals; about 80% are cattle and goats (MAF, 2013). Livestock grazing in Dhofar has reached unsustainable levels; there is a 46.6% annual deficit of livestock feed in Dhofar (Al-Mashakhi and Koll, 2007). The diminishing role of traditional institutions which regulated the use of grazing resources has led to their more open use and an accelerated rate of degradation; indicating a transition from traditional practises towards a market economy (Al-Mashakhi and Koll, 2007).

Grazing practises in Dhofar generally follow the transhumance system; full utilisation of grazing pastures with further supplements consisting of Rhodes grass and alfafa hay, sardine, concentrates and other by-products (Zaibet et al., 2004). It is likely this management approach is used at Wadi Sayq where livestock owners have permanent houses but practise seasonal movement of herds around the wadi catchment. The quality of feed from grazing pastures peaks after the monsoon rains but the quality and quantity of forage begins to decrease early in the dry season. Nutrient deficiencies and diseases associated with feed shortage can adversely affect animal health and impair productivity (Al-Mashakhi and Koll, 2007). Collaboration between the United Nations Development Programme (UNDP), Food and Agriculture Organization of the United Nations (FAO) and the Oman Government have developed range management plans in some areas of the country, however legislation pertinent to protect grazing resources has yet to be implemented in Dhofar (Al-Mashakhi and Koll, 2007).

The current degree of grazing pressure in Dhofar is unsustainable and threatens some of the biologically richest ecosystems in the Arabian Peninsula. The unique environmental conditions of the Dhofar Mountains entail a globally unique flora and fauna which constitute clear conservation priorities (Patzelt, 2012). The gently sloping wadi systems of Jabal al Qamar in western Dhofar represent a hotspot for biodiversity. Plant diversity is amongst the highest in the whole of Arabia; some of the most common trees and shrubs in the escarpment woodlands are endemic or regionally endemic (Patzelt, 2012). It is here that Wadi Sayq is located.

Wadi Sayq is government owned land where livestock can be freely grazed (H Al Hikmani 2013, pers. comm. 31 Dec.) and the effects of overgrazing are noticeable in all but the most inaccessible locations. The removal of vegetation due to overgrazing affects the geology and hydrology of the wadi system. The decreased vegetative decomposition results in deterioration of the soil quality and its water retention capability. Soil water retention is essential to life. It provides an ongoing supply of water to plants between annual periods of replenishment (Oke, 1987). Each year high levels of precipitation fall on Wadi Sayq and torrents of water flow through the wadi system. This leaches nutrients from the overgrazed landscape deteriorating soil quality and increasing surface runoff and erosion. This cycle of decline in soil quality and vegetation, impacts throughout the food web, threatening iconic biodiversity.

Recent research expeditions have highlighted the critical importance of the area for threatened biological communities, however many populations are small and restricted (Ball et al., 2013). The area is a stronghold for the critically endangered Arabian leopard (Figure 1) in western Dhofar; a flagship species for conservation in Oman (Spalton et al., 2006). Threatened subspecies of striped hyena and wolf as well as globally important populations of threatened bird species and a high number of endemic reptile species persist. Medium-sized herbivores might have historically occupied the wadi but have since been displaced by livestock activity. Predators now utilise smaller prey species such as hyrax, spiny mice, partridge and porcupine (Ball et al., 2013). Infrequent attacks on livestock have occurred in Wadi Sayq but it is not known which species are responsible.

Grazing control is the most important measure for the management and improvement of watershed conservation in Dhofar. Trials of deferred grazing whereby closures were implemented during the monsoon season have proven to extend forage supplies during the dry season by three months (Al-Mashakhi and Koll, 2007). Seasonal closure of the lower slopes during the monsoon does occur in some parts of the Dhofar Mountains, including near Rakyhut, to the east of Wadi Sayq.
Local community participation in planning and implementing improved management of grazing resources is vital for the success of any intervention. Local communities can provide their traditional knowledge and accumulated conservation and management experience to work towards a more sustainable grazing practise (Al-Mashakhi and Koll, 2007).

One response to “Masters Research: The Gist”