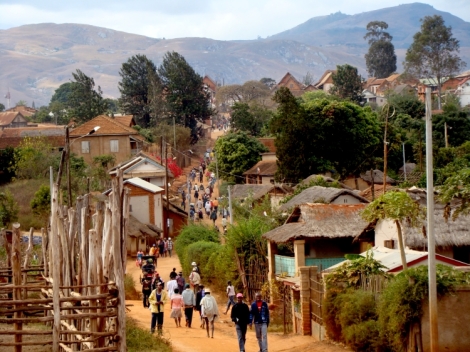 There is increasing demand for protected areas to achieve poverty reduction in addition to biodiversity conservation. However, given the increasing reliance of rural communities on natural resources and the unpredictable and complex nature of social systems, coupled with inadequate managerial and financial capacity in protected area networks, there are often few measurable outcomes in developing nations. Consequently new debates are emerging to determine trade-offs between conservation and development in order to achieve positive biodiversity outcomes within protected areas.

In 1872 Yellowstone National Park was established in the United States and the Shoshone, Crow and Blackfoot tribes were expelled from the park [1,2]. Similar ‘fortress’ management approaches were enforced for most protected areas until the IUCN World Conservation Strategy in 1980 where it was decided that protected areas needed to build more positive relationships with local people [2].
Today, 177,547 protected areas cover more than 12.7% of the earth’s terrestrial surface. Six different management frameworks are promoted by the IUCN and there has been an increase in the proportion of protected areas that involve local communities [3,4]. Protected areas that promote the sustainable use of resources (Category VI) have increased in their coverage from 14% in 1990 to 32% in 2010. Meanwhile, more strictly protected areas (Category I-IV) have decreased from 65% to 51% [4].
In 1982 at the World Parks Congress in Bali delegates recommended that all nations should strive to place 10% of their land under protection which was achieved by most CBD members. The latest Aichi targets promote members to place 17% of their terrestrial land under protection. Despite stating that protected areas should be effectively and equitably managed there is little in place to ensure this occurs. In addition evaluating management effectiveness is difficult due to the lack of ecological and social monitoring data and because effectiveness can be interpreted for different agendas.

In-situ conservation is a necessity to slow the rate of global biodiversity loss and there is no doubt that protected areas are a powerful tool. However, in their current state they are by no means a winning solution due to the complexities involved in their effective management, and subsequently, the rate of global biodiversity loss continues to accelerate. There is increasing demand for protected areas to achieve not only ecological, but also economic and social goals [5] and conservationists recurrently disagree regarding how best to manage protected areas, and more vitally, what the underlying purpose of protected areas should be [6].
Protected areas incorporating conservation and development management approaches fall under many titles as countries can freely implement their own management approaches as well as using those set by the IUCN. For example Australia alone has over 45 kinds of protected areas [2].
Some of the more widely used titles include ‘community-based natural resource management’, ‘community-based conservation’, and ‘integrated conservation and development projects’ (ICDPs). Unlike the former two, ICDPs focus primarily on protected areas [6].
The concept behind ICDPs is that the development activity creates revenue which is used as an incentive for the community to engage in conservation activities. In principle however, many ICDPs have failed to achieve their conservation goals. Four key reasons were identified by Winkler (2007) [7]. First, if the new revenue stream is not directly linked to conservation activity then there is no incentive to conserve biodiversity. This is often labelled as alternative livelihood strategies and often provides additional income on top of the unsustainable practises. However, if enforcement against the unsustainable practise is implemented then alternative livelihood strategies can be more effective [8,9]. Second, ICDPs may simply give too little incentives, they must promise a considerable benefit for conservation activities. Third, unless the development activity is a sure-fire method to achieve the optimum conservation goal then the project may be unsuccessful. Often development activities target just one particular aspect of the conservation problem without addressing the root cause. Finally, despite implementing a working relationship between the conservation and development activities the outputs to the community may enter complex social systems and fail to satisfy particular individuals or neighbouring communities. These outcomes are difficult to predict and require close monitoring for several years following implementation.
Additional criticisms of conservation and development approaches include; a slow onset of development activities, which can lead to the community losing interest in the project; projects may be unable to provide the income-generating and labour intensive activities that satisfy the livelihood needs of local people [10,11]; projects conflict with existing livelihood strategies; and projects fail to distribute the benefits efficiently and evenly amongst the community [12,13]. One study of 41 reserves in Madagascar uncovered a significantly uneven distribution of benefits among local people. 265,000 rice-farming households benefited, as did 25,000 urban households that received clean water, but 50,000 shifting agriculturalists were deprived of land within the parks [14].

The transition to landscape-scale buffer zones and multiuse management approaches were in response to protected areas becoming increasingly isolated by land-use change outside of the park boundaries [15]. Some sceptics critique that strict protected areas are accelerating deforestation, either by displacing and intensifying forest extraction elsewhere [16] or through the inadvertent neglect of lands outside of protected areas [17,18].
When considering protected areas at a landscape scale further issues arise regarding conservation and development approaches. The attraction model of Wittemyer et al. (2008) [19] and pull model of Oglethorpe et al. (2007) [20] explain that people settle close to the edge of protected areas attracted by the prospect of employment [21]. A commonly observed example of this is when unofficial guides are attracted to protected areas by ecotourism. The author has experienced this first-hand in several developing nations. Further complications arise when buffer zones or multiuse management approaches blur the regulations of rights of access, and illegal resource extraction may commence with negative impacts on biodiversity, as was the case in Kalamaloué protected area, northern Cameroon [21]. Within a protected area in Rwanda a hunting zone was formed in the 1970s, commercial cattle farms were established, and after the 1994 genocide, two-thirds of the protected area studied by Wittemyer et al. (2008) [19] was settled by emigrants [22]. There are exceptions to these models and in areas where the same pull and attraction factors are at play, such as poverty and population growth and prospects of employment, no immigration takes place, whereas elsewhere it does [21].
Carrier (1998) [23] introduced the term virtualism – “when the real world is expected to transform itself in accordance with models” [6]. Frequently, intricate multi-use zone plans work on paper but in practice they can be far beyond the managerial capacity, and ecological and social understanding of the protected area. Naughton-Treves et al. (2005) [6] explains that “much protected-area legislation and policy is a practical exercise in virtualism”.

It is fair to deliberate that revisiting strict protected area management approaches could be more effective. Sceptics such as Robinson (1993) [24] and Freese (1998) [25] explain that “humans usually, although not always, improve their condition by simplifying nature to the detriment of its biological diversity” [26], and so conservation and development approaches will ultimately fail. Furthermore, biodiversity conservation is already poorly funded, and the additional task of alleviating poverty in parallel is impossible unless increased funding is available. The recent expansion of protected area networks may have already outpaced the financial and institutional capacity for effective management, and even if greater financial resources were made available effective management would still be fundamentally difficult to achieve given the vague mandates for protected areas [15]. Some argue that conservation efforts focus too heavily on integrated conservation development projects targeting relatively low-impact activities of local people and fail to engage with the more pressing external stakeholders that may play a greater role in driving conservation problems [27-29]. Sanderson & Redford (2003) [30] state that “Without reshaping poverty alleviation strategies, biodiversity will pay the price for development yet again…”. As one can see there is a new wave of debates emerging for conservation scientists to identify trade-offs between conservation and development to advance conservation approaches.

It is now widely recognised that to conserve biodiversity one must ensure the protection of the whole ecosystem within which it is found. Unfortunately, most protected areas are not large enough to conserve whole ecosystem functioning and thus maintain adequate populations of threatened species. Research suggests that only around 10,000 protected areas are large enough to slow long-term species loss [6]. As such, conservation efforts should be enforced across larger landscape-scales. Perhaps at these scales, in less-fragile environments than those found inside protected areas, conservation and development approaches are more appropriate. There has been increasing pressure from development organisations for biologically-rich protected areas to provide for rural communities but as outlined in this paper, this is often too difficult to realize.
South Africa’s Working for Water programme demonstrates how landscape-scale conservation and development initiatives can be successful. A cost-benefit analysis showed that cutting down water-thirsty alien plant species was a more efficient solution to water provision than building dams, with an additional advantage of conserving biodiversity. Since its inception in 1995 more than 1 million hectares of invasive vegetation has been cleared providing employment for approximately 20,000 people. Employment is targeted at women from poor communities who receive training and additional socio-economic assistance [31,32]. Such large scale conservation initiatives can also be praised for their contribution to transnational conservation, maintaining earth-system functioning on a global scale.

Despite the scepticism surrounding the effectiveness of conservation and development approaches to protected area management, success stories do exist.
The Tamshiyacu Tahuayo Communal Reserve (TTCR) in northeast Amazonian Peru was set up in response to large scale commercial resource extraction by external companies [33]. The reserve is managed by the local communities, who collaborated closely with the Wildlife Conservation Society (WCS) and the Durrell Institute of Conservation and Ecology (DICE) to assess wildlife populations in the reserve and set hunting quotas accordingly [34]. They used a series of sustainable hunting models that could be understood by the communities allowing them to evaluate the wildlife populations. Effective management has been achieved using source-sink areas, catch per unit effort modelling, evaluation of hunting impact using harvest models and habitat protection [35,34]. Additional incentives include the permission for sustainable bush meat hunters to partake in the Peccary pelt trade providing additional income [34].
The success of this project can be largely attributed to the common interest between the local communities and conservation organisations that wanted to limit uncontrolled exploitation by outsiders. The reserve does not benefit from ecotourism and anti-poaching patrols do not exist. Social pressure is used to enforce hunting rules [34]. The management approach implemented in the TTCR has scope to be transferred to other protected areas in the Amazon where communities are willing to work closely with conservation organisations to manage forest resources.