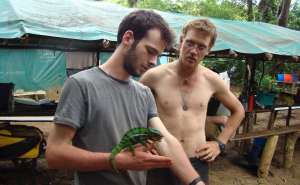 Four years have passed since I returned from my first overseas expedition to Madagascar. 6 months previous, I had just left school and started my first full time job to fund the expedition, and was accepted to study a degree in wildlife conservation. I was bursting with excitement and anticipation. Life was good.

At that time, in Madagascar, lives were also being improved through the hard work and commitment of President Mark Ravalomanana who had been working with international conservation organisations to set aside 10 percent of the country as national parks and nurtured a thriving ecotourism sector. Madagascar’s park system was pumping back half of the entrance fees into local communities and many people found employment through tourism as park guides and hotel staff. Two thirds of visitors went to Madagascar for its wildlife, and this in part, safeguarded its future.

However, whilst my life continued to improve, safeguarded by the delights of university life, the nation of Madagascar was dealt a much less fortunate hand. In March 2009, just 8 months after my return from the country, President Ravalomanana was chased into exile at gunpoint and the civil service and park management system collapsed. Overseas donations, which supported half the governments annual budget dried up and the country fell into a state of recession.

With no governance, the islands biological resources were ransacked and the previous ten years of hard work wasted. With no intervention from overseas organisations and a lack of governmental enforcement, natural resources such as precious hardwoods and endangered lemurs were exploited to their limits. Tourism dropped sharply and so the incentives for wildlife preservation disappeared.

Fortunately, whilst I was entering my third year of studies, Madagascar began to show small signs of recovery. Slowly political stability began to return, although international involvement remained cautious.

It’s now almost a year on since I graduated. I have just returned from Oman, I have my first paper in review and I am planning my Masters research. Life is good.

Unfortunately however, the current situation in Madagascar remains fluid, and subject to unexpected change. Elections are expected to take place this year promising some hope for political stability. Overseas conservation organisations have returned to the island with an increased sense of urgency and tourism is on the increase once again.

Let’s hope the country can find its feet, and against all odds, protect its valuable natural heritage over the coming years.

I hope it’s not too long before I return to the island where I confirmed my passion for wildlife conservation four years ago.